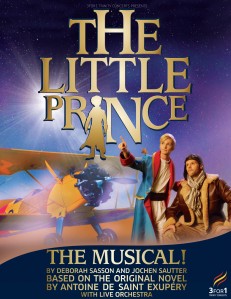 Antoine de Sainte Exupéry’s book comes alive with music, dance, extravagant costumes and spectacular, interactive video animations. The novel is a children’s book written for grown-ups, the show is a musical spectacular for the entire family.
The American star soprano and composer Deborah Sasson and German author, director and choreographer Jochen Sautter, who had once before successfully worked together on a new musical version of The Phantom of the Opera have teamed up again to bring The Little Prince to the musical theater stage.

A young boy’s dream to become an artist is destroyed by the adults. He finally agrees to enter a real career and he becomes a pilot. On one of his flights over the Sahara his plane has technical trouble forcing him to make an emergency landing. There, in the middle of nowhere, he meets a strange boy, the Little Prince.

Slowly the pilot learns more and more about this boy, about his small planet, which he has left because of a complicated first love with a Rose, about the boy’s encounters with a lonely King, a Drunk, a Vain, a Lantern lighter, a Businessman and a Geographer. He learns how the prince finally landed here on Earth, where he first meets a Snake in the desert, who offers him relieve from his earthly sufferings through a poisonous bite. The pilot hears about the merchant with the magic water pills, the lonely flower in the desert, the rose garden and the boy’s encounter with the Fox. The Fox shares a great secret with the prince. Now he is ready to return to his Rose, whom he had left behind on his planet. The pilot understands, that the Little Prince is decided to accept the Snake’s offer of the deadly bite to be “transported back” to his Rose.

The show has enchanted audiences all over Europe and ready to dazzle audience in the USA and Canada.