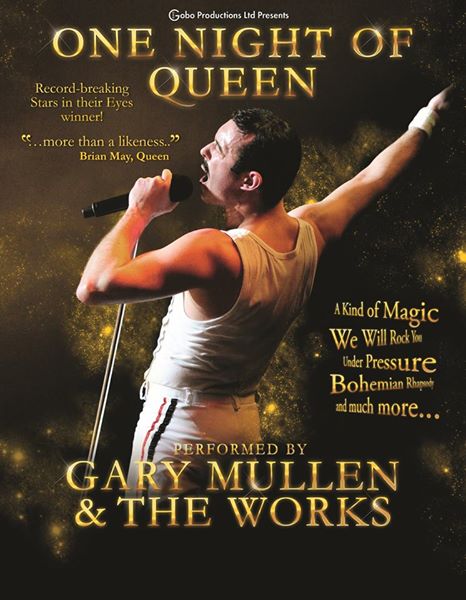 ONE NIGHT OF QUEEN PERFORMED BY GARY MULLEN & THE WORKS is a spectacular live concert, recreating the look, sound, pomp and showmanship of arguably the greatest rock band of all time. They have been hailed as the World’s Premiere Queen Tribute Band and have received rave reviews from over 650 Performing Arts Centers, Casinos, Fairs, Festivals, and Corporate buyers in the USA since 2008.

In 2000, lead vocalist Gary Mullen won ITV’s “STARS IN THEIR EYES” grand finale with a record poll of 864,838 votes, the largest number of votes ever received in the TV show’s history. Brian May was quoted on national television as saying; “Gary shares ‘more than a likeness’ to Freddie.” In 2002 Gary formed his band “The Works,” comprised of Davie Brockett on guitar, Jonathan Evans on drums, Billy Moffat on bass and Malcolm Gentles on keyboards.

Over the past 12 years, Gary Mullen & The Works have performed their show ONE NIGHT OF QUEEN to sold-out audiences throughout the UK, USA, Europe, South Africa and New Zealand to name but a few. They have also twice rocked the prestigious BBC Proms in the Park, in front of a very enthusiastic crowd of 40,000. Gary Mullen & The Works brings the spirit and passion of rock icon Freddie Mercury to life on stage with the spectacular rock tribute, ONE NIGHT OF QUEEN.

Fans of Queen will delight in this note-for-note experience of mega-hits such as “Bohemian Rhapsody,” “We are the Champions,” “Killer Queen,” “You’re My Best Friend,” “Crazy Little Thing Called Love,” “Radio GaGa,” “Under Pressure,” “Another One Bites the Dust” and many others. ONE NIGHT OF QUEEN will ROCK YOU! 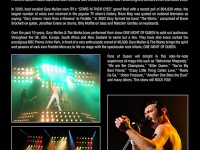 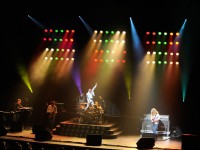 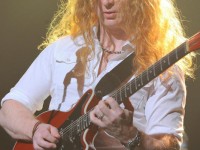 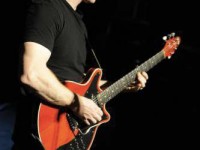